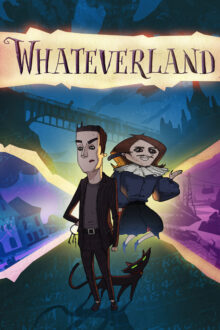 Whateverland is a hand-painted point-n-click adventure game with a branching dialogue system, non-linear gameplay, various endings and unique in-game turn-based board game. Find your way out of a magical prison called Whateverland with a charming ghost Nick by your side, get to meet the charismatic locals, steal and deceive or be a good boy and help others to discover all the different endings to this bizarre adventure. Each level can be completed in at least two different ways: you either steal from people or help them. The rich branching dialogues will tell you more about the world and its inhabitants, as well as influence your relationship with Whateverlanders and your sidekick Nick. There is no particular order of chapters in this game. More than that, if you ever feel stuck, you can drop your current chapter at any point in the story, and move to another one. And then another one. And another… You get the point.

Whateverland features 19 mini-games in total, although you won’t be able to complete all of them in a single playthrough. Along with challenges like giving a tattoo to a merman and making top-notch ramen (you know, the usual), on the path of a thief you will encounter a variety of locks simply begging to be cracked. Vincent is a skilled thief who decides to steal a precious necklace from a mansion of a lonely old woman named Beatrice. His plan would have gone perfectly well, but when she catches him red-handed, she turns out to be an ancient, powerful witch. As a punishment, Beatrice sends him to the parallel world she has created, where the witch traps those she considers her enemies. The first inhabitants of this bizarre world called it Whateverland, and since then it kind of stuck. Vincent teams up with a charming, yet a little annoying ghost named Nick, and together they have to find their way out. Are they going to make it? That’s for you to decide!

Did I just get trolled for 7 hours, surely someone was very high writing this game, even the main characters seem to be with me on this one. Now, I personally love self-aware adventure games, assuming they embrace what they are, if anything, I only have a problem with games that try to accomplish both, being stupid, and serious at the same time. Now to be fair, I really enjoyed most of the characters, actually, there are some sad and touching moments as well, but in general, the game is more on the lighthearted side, just being very chill about the whole thing. I think there is a real danger in making a game that feels like an unrelenting rollercoaster of cheesy jokes, but I think it gets away with it by not trying to pretend it’s something else.

Essentially there is an evil witch that tosses everyone she does not like into a pocket world, but all these lost souls made a little society there, kinda reminds me of Forgotton Anne a bit with the concept, but with less melancholy on the situation, if anything they seem to be having a great time there. I should give it credit for doing full voice acting, there is a lot of branching dialogue as well, and I didn’t have too many issues with the delivery, although the main character was a bit too chill, but I think it was intentional with a silly tone of the game. The game also features a turn-based minigame, you can skip it with items that you find around the world, but if you waste them, you will be forced to play it – and let me tell you, I don’t like that game even a little. 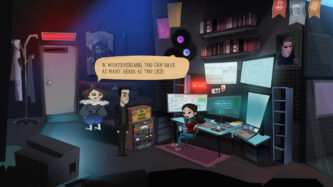 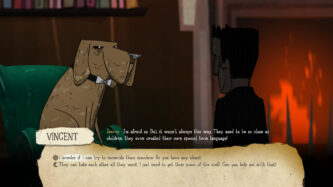 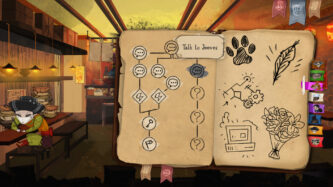 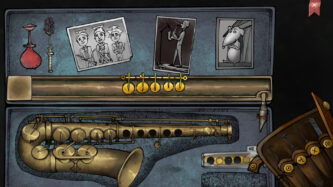