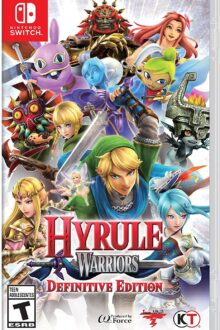 Hyrule Warriors mixes the hack and slash gameplay of Koei Tecmo’s Dynasty Warriors series of video games with settings and characters from Nintendo’s The Legend of Zelda series. Amongst many other characters, the player controls an original iteration of Link in melee combat to take on large numbers of enemies from the Legend of Zelda series. While there is a much stronger emphasis on combat than other games in the Legend of Zelda series, the player may use common weapons from prior games in the series, such as a sword, bombs, and Link’s signature spin attack. Enemy targeting also returns, in combination with elements from the Dynasty Warriors combat system. Obtaining items through discovering and opening chests is retained as well.

The game has a context-based combat system, in which the player character’s abilities change depending on the weapon chosen. Role-playing elements such as weapon and character leveling also appear.Defeating certain enemies gives players weapons bags, which will grant a random weapon to the character, and materials bags, which can be used to power up characters. “Sealed weapons” may also be found in treasure boxes, which increase the types of weapons randomly generated for the player in the field.[citation needed] The game supports an asymmetric local two-player mode with one player using the Wii U GamePad and another using a monitor. The game is also compatible with Amiibo figures, with figures based on The Legend of Zelda series unlocking additional content such as new weapons

The main campaign of Hyrule Warriors, “Legend Mode”, allows players to progress through the game’s story; these story chapters can be replayed with any character in “Free Mode”. Additionally, the game features an “Adventure Mode”, in which players explore a map based on that of the original The Legend of Zelda and complete specific objectives, such as defeating a certain number of enemies within a time limit or completing a mission with a specific character and weapon. An update released on the game’s launch date added “Challenge Mode”, which encourages players to collect as many rupees as possible in a set scenario. The in-game Bazaar allows players to forge new weapons, spend rupees to raise characters’ levels, create potions to temporarily boost a character’s stats in battle, and exchange materials for badges that augment characters’ abilities. The game also offers an additional quest to collect 100 Gold Skulltulas, tokens that appear in specific Legend Mode and Adventure Mode levels after defeating enough enemies, which will unlock illustration pieces of the several characters in the game and contribute to upgrading the in-game apothecary. 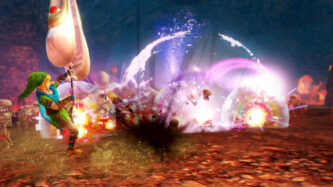 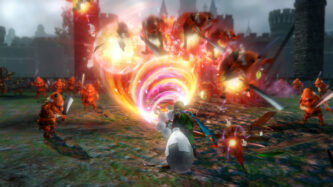 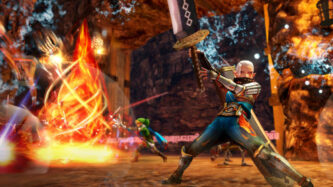 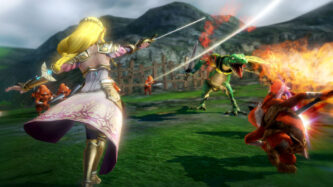