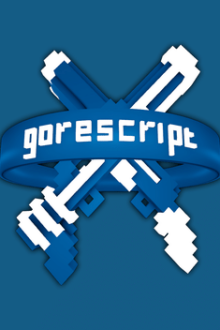 Gorescript is a classic first person shooter game, inspired by the great old classic FPS games that defined the genre. Fight your way through 18 handcrafted levels of frantic action paced gameplay, from easy to hardcore levels of difficulty. 18 hand crafted levels (2.5D) Levels can be finished with or without jumps (Jumps available only when you find the Anti-Grav Boots) 6 weapons (5 ranged, 1 melee) 5 difficulty levels, Permadeath and Blackout mode Global leaderboard rankings according to your total performance Secrets are not optional but necessary to upgrade your armory Do you have what it takes to beat the game? Give a shot to our free demo that you can find on our website. Gorescript was created by a single person in a custom game engine built from scratch as an ode to the great old first person shooters with an emphasis on frantic paced action gameplay.

Gorescript is one of those few Steam titles that does what it advertises on its Store Page and somehow still manages to surprise you in a pleasant manner. At a superficial glance I was expecting a barebones, generic fast-paced shooter in 3D and I witnessed instead, a true love letter to the old school PC shooters I used to play as a kid. Written in pixelated blood, naturally. The developer is a fellow Romanian, but I won’t be biased regardless. Truth is that for a Steam debut, Sergiu Bucur shows great promise. He went for a simple, yet effective formula. A no-frills experience that emulates gaming times long gone, without feeling like a cash grab as some of Gorescript’s direct competitors.

The game does share its DNA with some true classics such as Wolfenstein 3D (1992), DOOM (1993) or Quake (1996). Those went on to become staples of the first person shooter genre, while Quake also managed to incorporate an intriguing multiplayer component. Gaming history indeed. Yet Gorescript just pays homage, it doesn’t wish to copy anything from its “ancestors”. So you don’t have a story about demons or aliens. You don’t even know the names of your arcade-looking opponents nor does our nameless and silent protagonist, feature any form factor. I was tempted to name it as another quality Unity-powered indie release, but inspecting the game files and then visiting the game’s Steam Community Hub, the developer himself describes it as “Custom C++ game engine ftw!” and boasts the fact that Gorescript can probably run even on an older low-end PC. It really stays true to the “source material” but I actually enjoyed what I saw. Minimal style, sure. Both chromatically and from a 3D asset perspective, the game clearly focuses on pure action. 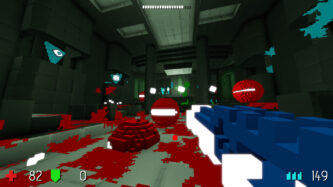 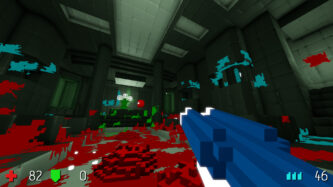 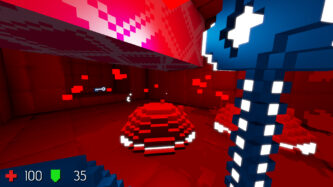 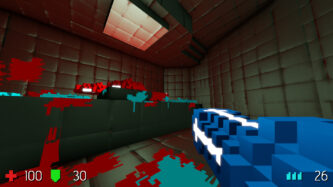